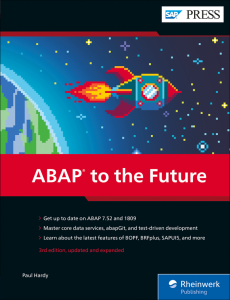 Stay on the cutting edge of ABAP technology! Learn what’s new with the latest ABAP releases—7.52 and 1809—and see what other SAP technologies are now bringing to the table. New to this edition: abapGit and transporting objects between systems, ABAP SQL, the RESTful ABAP programming model, and test tools for core data services, SAPUI5, and Web Dynpro ABAP. Take your ABAP coding to the next level!

What You Will Learn?

Learn the importance of test-driven development and unit testing and walk through new features like dependency lookup and test tools for CDS view, OData, SAPUI5, and more. Take a look at the latest recommendations and best practices for debugger scripting.

Create SAPUI5 applications with SAP Web IDE or SAP Build, and find out how to develop with Web Dynpro ABAP. Learn how to make the SAP GUI look like SAP Fiori for reporting.

About the Author of This SAP ABAP Book

Paul Hardy is a senior ABAP developer at Hanson and has worked on SAP rollouts at multiple companies all over the world. He joined Heidelberg Cement in the UK in 1990 and, for the first seven years, worked as an accountant. In 1997, a global SAP rollout came along; he jumped on board and has never looked back since. He has worked on country-specific SAP implementations in the United Kingdom, Germany, Israel, and Australia.

After starting off as a business analyst configuring the good old IMG, Paul swiftly moved on to the wonderful world of ABAP programming. After the initial run of data conversion programs, ALV reports, interactive DYNPRO screens, and (urrggh) SAPscript forms, he yearned for something more and since then has been eagerly investigating each new technology as it comes out. Particular areas of interest in SAP are business workflow, B2B procurement (both point-to-point and SAP Ariba-based), logistics execution, and Variant Configuration, along with virtually anything new that comes along.

Paul can regularly be found blogging away on SAP Community and presenting at SAP conferences in Australia (Mastering SAP Technology and the SAP Australian User Group annual conference). If you happen to ever be at one of these conferences, Paul invites you to come and have a drink with him at the networking event in the evening and to ask him the most difficult questions you can think of (preferably SAP-related).

If you want to download this e-book, please click on the cover image. You will be redirected to sap-press.com, the only website that sells SAP PRESS e-books. Don’t worry, if you prefer to hold your book the print version is also available for purchase.