Home » What is RICEFW in SAP?

Author Written by Ashish Surjan and last updated on Posted on March 30, 2021. Posted in Categories All Things SAP.
Advertisement 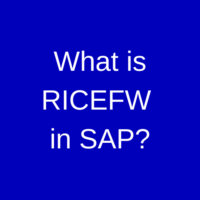 All the functional and technical consultants work on RICEFWs during their SAP project life cycle in the realization phase. This blog talks about the RICEFW and its purpose in an SAP project. RICEFW stands for – Reports, Interface, Conversion, Enhancements, Forms, and Workflows. When the business requirement cannot be fulfilled by standard SAP functionalities, then we require a RICEFW. All objects are defined using the RICEFW classifications in any implementation, roll-out, migration, or upgrade project.

Another name for RICEFW is WRICEF. It means exactly the same thing but just uses a different naming convention. WRICEF stands for Workflows, Reports, Interface, Conversion, Enhancements, and Forms. As you can see, these are the same objects but just in a different order. It is usually up to personal preferences which name to use. So, some SAP projects use RICEFW acronym while others WRICEF acronym. In the rest of this blog, we will use RICEFW acronym but all the points will also be valid for WRICEF.

How RICEFW is used in an SAP project?

An SAP implementation project life cycle has several stages. During the blueprinting and analysis stage of the project, we study the business requirements and map those requirements in SAP to provide solutions. The requirements which cannot be satisfied by standard SAP application are called gaps. Based on the category of the gap, objects are created in the form of a RICEFW item. Each gap will have one RICEFW object and the total inventory of RICEFW objects is considered as the task list of deliverables to be developed and managed.

Project functional teams are expected to fully test all the RICEFW objects and would have to be passed by the business users. These are the pre-requisite for business go-live in SAP. The quality of RICEFW objects plays a key role in determining the project’s success.

The below diagram illustrates the project phases and the significance of RICEFW in the realization phase.

A report in SAP is a custom transaction that is built-up using one or multiple programs that reads the required information from the database and produces/displays output after report execution based on the input criteria entered on the selection screen of the transaction, by an end-user. It is like a display of information in the required format based on a given selection.

These are the following categories of reports:

In case the standard reports do not have the required features to satisfy the customer’s requirement, then the project team develops custom reports. For this, it is necessary to understand the complete requirement and then finalize the selection screen, key fields, and the output format that should be generated when the report is executed. This is then considered as a RICEFW object.

In most of the companies, there are several processes in departments such as Planning, Shipping, Inventory Management, QA, etc., that are managed in external third-party systems that are Non-SAP systems. For example: during shipping, they use third-party logistic systems to pick/pack and ship the delivery. For that, the SAP delivery information is sent to the external Non-SAP system, and the Pick, Pack, and Shipment information is received in the SAP system through a middleware. These EDI communications are done through Interfaces and IDocs are used for this data transfer.

SAP has its standard EDI structures having defined segments and fields. But still, we need to construct custom segments and fields as all the required segments are not available in the standard. For that, the functional consultant needs to give the details of what data needs to be transferred, received, and the segments, fields, etc., to the ABAP team. This is then considered as another RICEFW object.

When the SAP is implemented or upgraded, the organization is going to sunset its legacy systems. Thus, their business live data needs to be uploaded in the SAP application. To upload the data in the SAP system such as the Material Master, Business Partner, Batch Master, Inventory, Bill of Materials, Open Purchase Orders, etc., the data needs to be converted from one form to another as per the system’s requirement. This is called a Conversion.

Here, the business team extracts the data out of their legacy systems. The project team then wants to upload that data into the SAP system by making use of the SAP data migration tools like BDC, LSMW, LTMC, etc. Here, the functional consultant works with the client team and the technical team to write some programs that will read the data from those files and load it into the SAP application. These will then be the new objects in the RICEFW list.

If the business requirement cannot be satisfied by standard SAP features, then the project team will add some custom functionalities by modifying the SAP standard. These are called enhancements. The enhancements are developed by technical ABAP consultants making use of BADIs, enhancement frameworks, or user exits. These will be the new RICEFW objects where the project functional team works with the business team to gather the requirement and then work with the technical team to modify or leverage the SAP standard and create a new custom solution as per business requirement. One example could be to develop RF capabilities at the IM level. Standard SAP has given the RF at the WM or EWM level. But if the client is managing the warehouse at the IM level and looking for RF capabilities, then this would be an enhancement.

Forms are print outputs generated from SAP application after saving the transactional data. Some examples are Purchase Order print, Material Document print, Delivery docket, Pick Ticket, Physical Inventory count sheet, Labels print, etc. Standard SAP has a pre-defined format and template for all these forms, but these pre-defined forms may not be meeting business requirements as they may like to add a company’s logo or print legal text on the forms. This requires the functional team to work with ABAP and develop custom forms as per the business requirement.

Below is an example of a typical purchase order form:

Workflow is the flowing of transactional data from one level to another in a sequence as per the organization hierarchy. At every level, one or more actions are required. Once taken, the workflow advances to the next level. For example: when the purchase order is created for a value of more than 1000 USD, this is going to the Manager for approval, once approved it will go to the VP for a second-level approval, and so on. In case the workflow as per business requirement is not available in a standard SAP application, then this results in a new RICEFW object. Here, the functional consultant coordinates with the technical team and develops the custom object-of-approval flow logic containing the details of data to be sent, under which condition this workflow is to be triggered, etc.

RICEFW objects are required in every SAP project. The consultants need to have a good understanding of the RICEFW which plays a key role in defining the project scope, estimating the project budget, defining the timelines, providing quality solutions, and achieving success in the end.

4 thoughts on “What is RICEFW in SAP?”