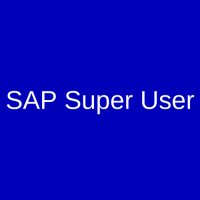 When a company begins the process of implementing SAP, the implementation partner asks the company to identify people from each involved department to become super users. These folks may be nominated for the role of SAP super user because of their deep knowledge of the company’s processes and their ability to identify needs of other end users. They possess strong expertise in the business processes of their domain and are well-versed in other areas as well. In many ways, the SAP super user is similar to the business process owner and the subject matter expert, but the super user has a more functional role and spends more hands-on time in SAP. He is kind of like a glorified end user.

The SAP super user creates a link between end users and the implementation team. They should have strong communication skills, as they need to be able to convey the business requirements to the implementation partner. They act as representatives of their departments and are also the first line of support for end users. Thus, SAP super user should know and understand the users and their functions.

During the implementation cycle, super users take an active role in learning the SAP solution, testing the system and training end users. They end up with intimate knowledge of the SAP business processes and become the champions of the implementation.

After go-live, super users usually have special access within SAP which other end users do not have. For example, an end user might have access to create a document and park it while SAP super user has the right to post it.

The SAP super user is mainly responsible for:

An SAP super user should be a great communicator, with a strong desire to make their company more efficient. They should have a keen ability to communicate their company’s processes and interpret instructions from the implementation team. This not only boosts the performance and pace of the SAP implementation but also creates efficiency in transmitting ideas amongst all parties.

Aside from strong interpersonal and communication skills, SAP super users should possess strong documentation ability. They should be able to read functional specifications as well as create and update training, testing and user guide documentation.

Furthermore, having prior SAP experience is always a plus for a super user. Awareness of the nuances and behaviors of SAP can alleviate a lot of friction and add efficiency to the implementation project.

An analytical mindset, problem solving skills and easy adoption of change are some traits of a strong SAP super user. They should be a “people person” and skilled at coaching and motivating end users. Similar to the business process owner and subject matter expert, the super user should be able to mediate and resolve friction between the SAP implementation team and the business team.

On a more abstract level, the ideal super user has a passion for constantly learning. He is observant of opportunities for improvement and comforting towards his colleagues.

It is vital for a company to select an SAP super users who has deep knowledge of the processes for which he is responsible. A self-starting, passionate person with the relevant knowledge is ideal for this role. It is critical that this person is able to communicate effectively between end users and the implementation team.

As the SAP implementation progresses, the super user may be responsible for championing the SAP cause to end users, as well as managing change and minimizing resistance. Their skill and experience in the system may also lead them to have additional authorizations in the live environment.

In the long-run, the SAP super user is the gatekeeper for a system that runs smoothly and is utilized to its maximum potential.