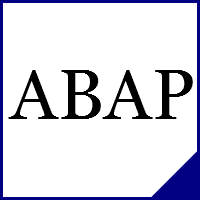 What is SAP ABAP?

Here we provided a brief description of SAP ABAP, which is a programming language for developing business applications with SAP, and also some useful information about SAP ABAP Certification. ABAP stands for Advanced Business Application Programming and is primarily used for enhancements of the standard SAP modules, such as Business Intelligence, Financial Accounting, Controlling, Human Capital Management, Materials Management, Production Planning, Sales and Distribution, etc. ABAP is a programming language of a high-level and it provides an abstraction of the basic database level.

ABAP Workbench is a special development environment that enables creation, modification and testing of programs. ABAP programs run on application servers and power work processes that execute individual dialog steps of SAP program. ABAP was developed by SAP and for SAP. It is not used anywhere else. Therefore, people who learn this programming language and think about undertaking SAP ABAP certification will be tying their future careers with SAP. Each ABAP program consists of the following parts:

The following picture illustrates the place of ABAP programs in the overall SAP architecture. 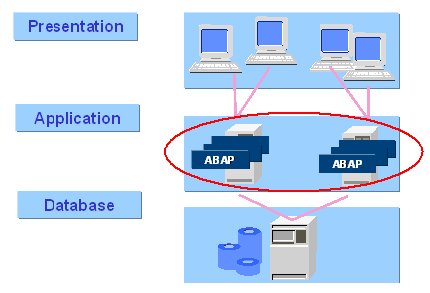 For beginners, SAP architecture might look confusing at first and it is necessary to spend some time with SAP Help Documentation for understanding why there are so many components and how SAP ABAP links them. We wrote an article with simple explanation about how does SAP work and this could be a good start before diving into the official documentation from SAP.

The simplest ABAP program (also known as “Hello World” program) looks like this:

Similarly to other modules SAP came up with a certification program for people who do ABAP programming. Unlike functional SAP modules (e.g., SAP FI or SAP SD), SAP ABAP certification is considered to be “technical”. Therefore, SAP calls people who passed this certification “Certified SAP Development Associate”.

The official name of this certification is SAP Certified Development Associate – ABAP with SAP NetWeaver X.XX where X.XX stands for the version of SAP NetWeaver and periodically changes with introduction of new version of the NetWeaver. The certification code for this exam is C_TAW12_731. By the way, SAP NetWeaver is a platform hosts ABAP Workbench and other SAP components (like ERP or BW). The main purpose of SAP ABAP certification is to verify knowledge of developing programs for SAP using ABAP. So, theoretically everybody who passed this exam should be able to write programs that extend or modify the standard functionality of SAP systems.

Usually, people who go for SAP ABAP certification (or just for ABAP developer profession) have highly technical background. For example, they could have Bachelor degree in computer science and know how to write programs in Java or other programming languages. If one knows how to write programs, usually it is relatively easy to learn basics of SAP ABAP because all you need to learn is a new syntax and rules for organising your programs. However, it is could be very challenging to master SAP ABAP at the advanced or expert levels due to a large amount of technical nuances of SAP.

Exactly like other SAP certifications of the Associate level, SAP ABAP certification offers you to answer 80 questions. Each question is multiple-choice (so, it is necessary to just tick all the correct options). There is no negative marking for wrong answers. Therefore, if you don’t know the correct answer for sure, it makes sense to try and guess it. Even if your guess turns out to be wrong, you will not be given negative points for providing the incorrect answer.

SAP ABAP certification score is calculated in percent. So, if you answer all the questions correctly, you will get 100% score. In the real world, it is difficult to achieve 100% score not only because you might not know some ABAP topics but also because the questions are often formulated in confusing way. But don’t worry too much about it because the passing score for SAP ABAP certification is around 60%. So, SAP leaves you some room for making mistakes.

How to Pass SAP ABAP Certification?

You will not be able to pass SAP ABAP certification if you don’t know ABAP and programming. These are the essential prerequisites of taking this exam. Unfortunately, it is not sufficient to just know how to develop programs with SAP ABAP for passing the certification. There are many questions that are difficult to answer if you did not read the official training materials from SAP.

Based on our experience, we can recommend the following books for study:

As far as we know, it is not possible to buy these books from retailers. SAP prefers to distribute these books only to those people who purchased their official training courses. If you go to their SAP ABAP course, they will give you these books for free.

If you do not want to pay a hefty amount of money for the official training course, it could be a good idea to ask your colleagues of friends who previously attended the official training to borrow these books for several weeks. Another alternative is to use SAP books (available to purchase) because they generally explain the same concepts. In this case, you should make sure that you closely follow SAP ABAP certification syllabus in your preparation. It will help to focus on the important topics and allocate less attention to questions that do not have big weight in SAP ABAP certification.

If you decide to study yourself, you may need access to SAP system for doing practical exercises. Again, there are different options. One opportunity is to purchase access to an SAP system that was set up and is maintained by somebody. Learn more about it here: SAP IDES Sandbox. The benefits is that the system is ready to use and it is a full SAP ERP system. The downside is that you need to pay for it. Another opportunity is download developer and/or trial editions of SAP NetWeaver from SAP website and install them on your own computer. More information about this option can be found here: SAP Developer and Trial Editions. The benefit of this option is that it is FREE. The downside is that you will need to figure out how to install and configure it.

Finally, we would like to wish you good luck with passing SAP ABAP certification and success in your SAP career. Let’s hope that your achievements will keep you motivated to continue professional growth.