Author Written by Pavel Astashonak and last updated on Posted on June 9, 2017.
Advertisement 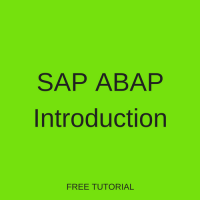 Welcome to SAP ABAP Introduction tutorial. This is the first tutorial of our SAP ABAP training and we will begin learning basics of SAP ABAP here. You will learn about ABAP application area, ABAP naming conventions, ABAP data types, ABAP basic operators, and finally create your first HelloWorld program in SAP ABAP.

During its history, ABAP survived a vast number of releases and its syntax and principles were re-designed repeatedly, so it is practically impossible to cover all moments and techniques in a single tutorial. Therefore, in this tutorial we will stick to the most basic elements which are valid for any ABAP release. Release-specifics elements as well as obsolete ones will be followed by an additional note.

ABAP was developed by SAP SE company and stands for German abbreviation Allgemeiner Berichts-Aufbereitungs-Prozessor, which can be roughly translated as Advanced Business Application Programming, which generally makes sense. It is mainly used in several SAP products, main of which is SAP ERP, and used mostly for programming business applications. It is not used for system or low-level programming, unlike C or C++ and cannot be used standalone without SAP installation. ABAP can be generally classified as high-level programming language which experienced strong influence of Cobol language and even has some common syntax constructs.

ABAP mostly deals with common business entities which are predefined in SAP, such as order, quotation, delivery and so on, so it contains strong typing and a big toolset of predefined types, it also utilizes centralized reusable code library. As we speak about enterprise software, which prioritize safety, compatibility, scalability and reliability, all these concepts are fully implemented in ABAP language. Downward compatibility holds pride of place in ABAP and any piece of ABAP code can be reused continuously on any version ABAP on any platform with rare exceptions. It also has downsides though: maintenance of such systems often turns into pain, as one should be aware of all legacy code specifics and know obsolete syntax.

All developments in ABAP are done in user namespaces Z and Y, they also called customer’s namespaces. What does it mean in practice? As SAP’s greatest value is stability and maintainability of code, it doesn’t allow to edit or create just everything you want, and all parts of any SAP system are strictly divided into standard and customer’s namespaces. Customers are allowed to create and edit object starting only from Z_ and Y_, and all other letters are reserved by SAP.

Other restrictions one can follow during the developments are:

The alternative variants are not prohibited and above naming conventions are non-obligatory, however strongly recommended. One should always remember that SAP code is created once and is used for years, and it is better to stick to best-practice to ease the work for the man who will maintain your code.

ABAP types can be divided into numeric types, character-like types and byte-like types.

ABAP numeric types are b, s, i, p, decfloat16, decfloat34 and f. Their properties can be summarized in table:

The numeric data types are mainly utilized in arithmetic calculations. Data types b and s are internal data types and cannot be used by developer. Data type p is generic; therefore, its length is not the part of the description, also one should remember Fixed point arithmetic program setting must be set in order p decimals separators to be respected.

ABAP character-like types are c, string, n, d, t. Their properties can be summarized in table:

Any six characters that are valid as times in the 24-hour clock format “hhmmss”.

The character-like data types are used for string processing. Data types n, d and t have special attributes for storing numbers, data and time, however types string and c are generic and can be used for anything. The valid values for types n, d and t are subsets of the value range, and specified in description.

ABAP byte-like types are x and xstring. Their properties can be summarized in table:

The byte-like data types are mainly used for processing byte strings. One should remember that x types is generic and its length is not part of its description. Developer should also respect maximum size of string in current session.

Unlike other languages, ABAP types do not need to be initialized when declaring, they are initialized by default by initial values. Initial values are values that were assigned to variable by compiler before any operation was made on it. For most of the numeric type initial value is 0, and for character-like type it is a space.

ABAP operators can be divided into several groups, according their operand types.

DIV – integer part of the division

MOD – positive remainder of the division

BIT-XOR – exclusive OR for bits

< – tests if first operand less than the second

> – tests if first operand greater than the second

>= – tests if greater or equal

BETWEEN – tests if operand belongs to range

Operands in ABAP could be:

Unlike other languages in ABAP programs (program objects) have strictly predefined types and one should choose before creation the type of the program to be developed.

There are many program types in SAP ABAP, and we will not examine all of them now, but will show you only the main type, which are used most frequently by developers. This is executable program (type 1) which also informally called report by many of old-school programmers. Why report? Because, historically ABAP language’s main domain was business reports, analytics and accounting calculations, which predefined most application aerated on ABAP, which included reporting functions. From those times term “report” inevitably followed ABAP programs.

What is the structure of typical report? Here it is:

That’s it, seriously. The one and only mandatory element for ABAP report is ABAP statement REPORT. You need no more statements, and you can freely create empty reports which would be fully valid programs. However, of course they would be insignificant in business sense without other useful statements.

So now we will enumerate essential blocks of a typical report and will try to create HelloWorld app.

Let us create out first ABAP program aka HelloWorld. When creating program object in repository attention should be payed to following moments:

Now we are ready to create our first ABAP program:

Here is our program output: