Author Written by Prasanthi A and last updated on Posted on June 5, 2017.
Advertisement 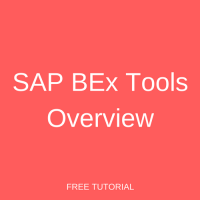 Welcome to the tutorial where we will provide an overview of SAP BEx tools. SAP BEx tools allow you to perform reporting (BEx stands for Business Explorer). You will learn about the tools in BEx suite of applications offered by SAP. After completing the tutorial, you will be able to explain what tasks can be solved with each of these tools and what are their unique features.

You can create, find, run, view, format, manage, schedule, and precalculate the reports. Here is the list of the main SAP BEx tools:

Let’s take a look at each of these SAP BEx tools.

In order to design queries and generate data for analyzing with an InfoProvider, Query Designer is the primary tool that needs to be used. There are many Online Analytical Processing (OLAP) features such as Hierarchies, Restricted Key Figures, Calculated Key Figures, and Variables available in Query Designer. OLAP basically does multidimensional data analysis. You can also easily create conditions, cells, and exceptions without any lines of code. SAP BEx Query Designer tool can be seen on the picture shown below.

SAP BEx Analyzer is a Microsoft Excel based tool that is primarily used for analysis and reporting. Simply put, the data is shown in Microsoft Excel workbooks and these workbooks allow you to do drill-down and filtering using OLAP functions of SAP BW. You can continue to use the standard features of Excel along with the augmented features offered by BEx Analyzer. As needed, Visual Basic Applications (VBA) can be used to develop custom programs. The BEx Analyzer tool can be seen in on the picture shown below.

SAP is not vigorously developing BEx Report designer, instead SAP is encouraging to use Business Objects Reporting for creating reports that are suited for presentations.

This can be a document or a URL that can be accessed via a link. The main benefit of precalculating is that it reduces the time users wait to get the output. It also lessens the workload on servers during peak time.

This can be done through portals, precalculated reports, or email. Broadcasting Wizard is mainly used to configure the broadcasting.

You can also schedule the broadcast. For instance, you can send a report to users via email every 12 hours periodically. To create and schedule the background jobs, you will need some authorizations. In general, this access of configuring broadcasting is given only to few users. You can launch SAP BEx Broadcaster from the following tools:

The overall SAP BEx suite can be seen on the diagram shown below.

If you just want to create a simple report, you can use SAP BEx Query Designer and SAP BEx Analyzer. Instead of SAP BEx Analyzer, you can also use SAP BEx Web Analyzer which can be accessed without any extra installation. Once you’re done creating a simple report, based on the requirements, you may use SAP BEx Web Application Designer (WAD) to optimize the report for Web. You may also use SAP BEx Report Designer to make the report optimized for presentation. The report can be later distributed through SAP BEx Broadcaster. Instead of SAP BEx Report Designer, you may use Business Objects Reporting such as Crystal Reports, Web Intelligence, and Analysis for OLAP for creating report that is suited for presentations.

Apart from building the dimensional model, you have to take time to decide on the sophistication needed from the reporting tools by discussing with business stakeholders.

There are many big vendors in the marketplace who have well-regarded analytical tools. Along with the third-party tools, Microsoft released its own tool called Data Analyzer that can be an economical alternative. There are also other alternatives like Cognos and Business Objects to name a few. Assuming your client has already purchased SAP license and implemented dimensional model in SAP BW, it’s time to evaluate SAP BEx tools that are of use to implement the report as per the client requirements.

Each tool in the SAP BEx suite has its own function and output that gets easily integrated with the other tools for further enhancements. Hence, it is of utmost importance to identify all SAP BEx Tools required to deliver the business need. After the reporting tools are selected, query design and presentation should be a simple task. The ETL tasks (Extraction, Transformation and Loading) are more complex and challenging than designing the queries.