ERProof » For University of Kentucky, SAP’s HANA is “Disruptive” 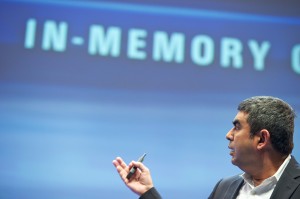 The University of Kentucky says it has reshaped its business intelligence (BI) capability as a result of adopting SAP’s in-memory system, HANA. Vince Kellen, the university CIO, calls it a “disruptive technology,” and for this institution at least, that appears true.
Analysts are more restrained in their assessments of HANA, in part, because of a tug of war between so-called engineered systems, represented by something like Oracle’s Exadata platform, and systems that use x86 hardware platforms such as HANA.
Whether the one-year-old HANA system succeeds for SAP may depend, in part, on whether it gets new customers for the company. University of Kentucky is already an SAP customer.
But none of these tech industry issues change how the university used SAP’s in-memory technology to reshape its business intelligence services.
Kullen said the university was searching for ways to improve retention rates of its students and boost number of students who graduate.
The university collects detailed data about student retention at various stages of academic progress. It has course history, grades, class attendance data from the classes that track it, and engagement data — a measure of student participation in virtual classroom spaces, including discussions and assignment downloads.
“All of that engagement information gives us clues as to what is going on with student retention,” said Kullen.
The university initially wanted to identify students that may be having problems and to create automated workflows to proactively contact students and faculty, with activities ranging from a simple email poke to tutoring services.
But getting at that information is difficult. Typically, it would have involved building a data warehouse and then employing ETL activities (extract, transformation and load). But with HANA, the university was able to use real-time replication right from SAP systems that collect this data, via HANA-ready feeds.
“We saw the opportunity to transform how our business intelligence teams work,” said Kullen.
Instead of manually aggregating data and running batch processes, the university’s approximately 14-member BI team has morphed from being “back office plumbers” to serving as “advisors and model builders for our users,” said Kullen.
The new system has been in production for about a month, and it will take time to see what impact it has on student retention, said Kullen.
The system was built on Dell hardware, and the university is using the vendor’s services. Dell has developed student retention data models for the school, and has made them part of their services offerings.
Burk Buechler, portfolio director for Dell application services, said the company built the university system in two phases. It first got HANA deployed and connected to key data points, then built analytical dashboards.
Underlying the broader use of HANA is whether to use x86 systems or so-called engineered systems, which include IBM’s recently announced PureSystems approach.
Engineered systems offer performance gains, meaning faster time to realize value and “less cumbersome” management, said Alys Woodward, a research director at IDC. On the other hand, “software on commodity hardware reduces vendor lock-in and enables the use of cheaper components,” said Woodward.
How SAP HANA “will play in the broader marketplace — outside SAP’s core install base — against Oracle Exadata and IBM engineered systems, depends to some extent on how these two opposing concepts will play out,” said Woodward. IBM’s recently announced PureSystems fits into the engineered system category.
Boris Evelson, an analyst at Forrester, said that whether HANA is the right approach depends on how it is being used. HANA is much more applicable to those cases where business requirements change all the time. That means the queries change frequently as well. HANA is less applicable to stable, status quo environments, he said.
It’s also important to recognize whether HANA is solving problems that could be solved in some other way. Typical BI challenges include things like poor data quality, which are problems HANA will not solve, said Evelson.
HANA is also expensive, said Evelson, but it can deliver “solid ROI” if it is being used for the right reasons. It can compress data more efficiently in memory, and users can save time and money by not having to constantly tune and retune queries, he said.