Author Written by Velmurugan Saravanavelu and last updated on Posted on November 30, 2017.
Advertisement 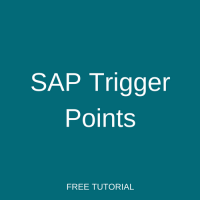 Apart from the system statuses, we can also define our own status which are called “user statuses” and they are based on the business process.

Let’s look at the example of production statuses. Below is the standard production order sequence.

For this sequence, there will be corresponding order statuses:

Now, let’s discuss how to create SAP trigger points and how to assign them to operations in SAP PP routings.

Here are the steps involved in the trigger point process:

Please follow the path in SAP Easy Access menu shown on the screenshot below to start the transaction for creation of SAP trigger points. 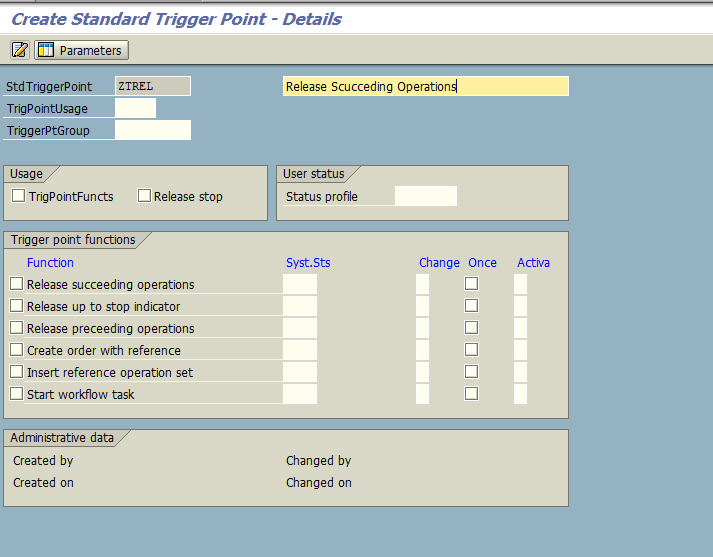 Here are the fields available on this screen and their description.

Usage: We can group trigger points with similar function using this field.

Trigger Point Group: We can group SAP trigger points with different functionality into one group and assign it to routing operations. This field is optional.

User Status Profile: It is only required when you want to execute/trigger functionality by user status instead of system status.

As per the production process, operation OP02-OP04 should not be started unless OP01 is completely done. In that case, we can define the trigger point as shown below.

When system status of the first operation (OP-01) is changed to CNF (fully confirmed), the trigger will perform the function. If we set “Once” checkbox, then it the function will be performed only once. Here, the function is to release the succeeding operations (OP02 to OP04). This function can be done automatically by the SAP system or manually. This setting is controlled by “Activate” field. You can see possible options for this field on the picture below.

Now, go to transaction CA02 (Change Routing) and access operation overview menu after selecting the operation for which you want to assign the trigger point.

You will see Operation Trigger Points overview screen. Click on

From this screen, we can also see details of the function defined in this trigger point. Just select the line with the trigger point and navigate to the following menu:

You will see the screen with the details of the operation similar to the one that we saw when created this trigger point.

Now, go back and save the routing.

You can see that the trigger point is assigned to operation ‘0010’ in the Production Order Operation Overview.

By clicking the icon

, we can see functionality of this trigger point.

Now, look at the system status of each operation which is as “CRTD”, i.e. created.

When we save the first operation, the system will show Trigger Point Function window.

Now, you can observe the status of the second operation in the order which was automatically released by the trigger point. The status “REL” was set for it.

This example illustrates how SAP trigger points can be used to perform certain functions (in this case, release subsequent operations) in production orders.
—

Did you like this tutorial? Have any questions or comments? We would love to hear your feedback in the comments section below. It’d be a big help for us, and hopefully it’s something we can address for you in improvement of our free SAP PP tutorials.

Go to next lesson: