Author Written by Pavel Astashonak and last updated on Posted on May 29, 2022.
Advertisement 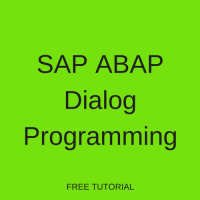 Classic screen or Dynpro is the thing you will meet most often in ABAP. It can comprise of multiple smaller objects and controls inside. Here is the schematic picture of a typical SAP ABAP screen.

The above screen is the standard screen from CR03 transaction. However, users can freely create custom screens too. Every screen, besides graphical representation, has its internal number and programmatic entity. It can be reviewed in ABAP Workbench transaction (SE80) by ticking target program hierarchy and expanding screens tree.

Each screen is a programmatic object which can be called by the ABAP statement CALL SCREEN like this:

where dynnr is a Dynpro number.

We already know that classical screens are both programmatic and visual objects, but how they are created? For this purpose, one can use the usual development transaction SE80 or a special transaction SE51, called Screen Painter.

Here, one can edit and create screens using different approaches: by specifying attributes, by direct graphical painting and by editing layout.

Basic screen elements that can be placed onto the screen are:

Here we do not dive into the GUI controls details and will review them in the future tutorials.

The second type of dialog objects in ABAP is a selection screen. What is its main difference from classic selection screens? The thing is pretty self-explanatory and lies in the name: they are used for selection of data from database. Classic screens can carry this function too but selection screens do this significantly better and here is why: they do not need to be created in advance but are rather declared via a set of declarative statements. This makes development process more robust, rapid and allows to fulfill routine reporting tasks more easily. The main declarative screen for selection screen is created like this:

where ssn is the screen number.

Corresponding declarative statements for different selection controls are listed below.

Empty line for division of different controls on the screen is declared like this:

where 3 is the number of lines to be skipped.

Split line for the same aims is declared like this:

where pos is the start column of the line, len is line length, and modid is the group modifier ID.

where pos is the start column of the line, len is line length, modid is the group modifier ID, text is comment text, sel is the selection field for which the comment is put, and vlen is the comment visible length.

Block is a selection screen entity which groups some set of elements to process these elements in a batch during event handling. It is declared like this:

where block is the block ID, and title is the title of the block frame.

To have a good grasp of dialog events one should have a good understanding what is a dialog step in SAP.

The user interaction with SAP system is divided into dialog steps which forms screen sequences that users see on their screens. Dialog step is a functional unit that exposes some piece of functionality to the user, waits for their reaction and handles user actions. It can be divided into three logical steps:

PBO or Process Before Output is a Dynpro dialog event that is fired before the screen is showed to a user. After the processing of this event, ABAP Runtime Environment passes global variables to the corresponding screen fields. Passing is done based on their names: variable is passed to the screen field with the same name.

PAI is a Dynpro dialog event that is fired after showing the screen and after the user triggered some action on the screen by executing any screen control that is associated with function code. What is a function code? It is some code assigned to any element in screen painter which defines event ID by which ABAP Runtime Environment handles user actions. A function code can be assigned in GUI mode, like for classic screens, or declaratively, like for selection screens. In GUI, one can assign function code in element properties like shown below.

For a selection screen, one can declare function code via USER-COMMAND clause. For example, for a button it will be:

Other important dialog events one can meet in his ABAP practice include POH or Process on Help Request. It is a dialog event fired when a user presses F1 button, i.e. requests help from SAP GUI. The developer can build in some custom help window or embed some additional processing.

POV or Process on Value Request is the most interesting and one of the most important events a developer uses in his practice. It is fired when a user requests search help by F4 button in any screen or GUI control within SAP environment. We have already reviewed search help in the previous tutorials, so nothing is new here.

With the help of this event a developer calls standard and custom events, handles user choice after the calls and makes additional processing of the results.

In the previous section, we reviewed main dialog events in ABAP screen processing but didn’t discuss how they are implemented and processed in practice. Let us dive into some details.

PBO and PAI events are implemented using the declarative keyword PROCESS which defines processing blocks for dialog events. The typical screen processing looks like this:

Each processing block is started with the word PROCESS and ends with the next block declaration. These statements are formally not ABAP and are treated as a screen subset of ABAP language.

These statements are put into the Screen Flow Logic tab of the screen properties as shown below.

Event handling logic for dialog events is usually packed into dialog modules which are defined using keyword MODULE. In our example, we see status_0500 module which is executed on PBO event.

Let’s have a look at another example. The user_command_0500 module is executed on PAI event. The latter module name is quite self-explanatory and defines actions which should be done for different function codes. Let us analyze a typical INPUT dialog module where user actions are handled:

Firstly, ok_code variable is declared. It is a good practice to store function code from SY-UCOMM there, as SY-UCOMM often changes during runtime.

Then, CASE statement is called which allows handling of user commands and calling appropriate screen for each function code. This simplest sample module shows how one can handle events from user input using a CASE statement which allows to fulfill most of the routine tasks in SAP ABAP dialog programming.

Go to next lesson: ALV Report in SAP ABAP