Author Written by Pavel Astashonak and last updated on Posted on August 10, 2017.
Advertisement 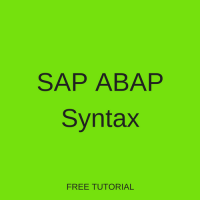 The following name conventions in ABAP apply to variables:

Literals are variables that cannot be addressed by name, they are declared via the string in the source code of a program. Examples of literals:

In the above example, the first line is the numeric literal and the last two are character literals. In the last example “&” literal operator is used to concatenate literals.

Constants are static data objects that cannot be changed during runtime with a predefined value. They are defined with a statement CONSTANTS and all data objects typing rules are applied to them as well. Example of constant is:

Next, let’s talk about SAP ABAP syntax for declaration of data objects. ABAP variables can be declared using keyword or by its own. The latter case are literals and constants, which were described in the previous chapter.

Declaration of data objects is dependent on context and can be done through the following statements:

DATA – general way of data object declaration which is valid in any context.

CLASS-DATA – statement for declaring static data objects in classes. Their lifetime is dependent on object lifetime.

TABLES – declared work area, i.e. a flat data object from Data Dictionary. This statement if prohibited in classes and object-oriented context, and generally used for passing data between PBO/PAI fields.

Now, let’s talk about SAP ABAP syntax for operators. ABAP operators is the basic element of ABAP programming language, which implements data manipulations, data calculations and both memory and IO operations in ABAP. As a rule of thumb, they are usually categorized by operation type or operand type. There are the following groups of ABAP operators:

Declaration operators declare variables and field-symbols in its position.

DATA – declares variables of any data type, which is visible within the current context of its position.

FIELD-SYMBOL – declares special ABAP type, field-symbol, which serves as a placeholder for existing data objects in memory and allow assigning them to a field-symbol.

Constructor operators declare variables and field-symbols in its position.

= – a simple assignment of a right operand to left operand

?= – a downcast operator, which performs assignment between two references. As a result, both of the references point to the same object.

There are also two legacy statements that can conduct assignments, they are MOVE and COMPUTE. MOVE contains part of the available semantics of =, and COMPUTE can be written in front of the any = statement but is simply ignored.

DIV – integer part of the division

MOD – positive remainder of the division

BIT-XOR – exclusive OR for bits

< – tests if the first operand less than the second

> – tests if the first operand greater than the second

>= – tests if greater or equal

BETWEEN – tests if operand belongs to a range

Chained statements are the most amazing thing one can find in ABAP. If you have an action which should be done on several operands, you can unite these operations into one consecutive statement for the clarity and conciseness. For example, often this is used in data declaration. Instead of typing

can be replaced with

This is the most interesting part of SAP ABAP which a developer who came from other object-oriented programming language may not be aware of. Every ABAP executable program (type 1) has a predefined set of events. Event blocks divide ABAP program into parts and handle standard events in ABAP runtime. Every event block is introduced by an event keyword and lasts till the start of the next event block. SAP ABAP syntax for block statements is simple and here are the main ABAP events:

This event is fired before all other events at the moment program is loaded into an internal session.

During this event, global data of the program is initialized. This event is fired right after the LOAD-OF-PROGRAM. Usually this event is used for initializing selection screen values.

Deprecated statement used for legacy programs involving logical databases and which designated that selection from logical DB is ended.

This event is triggered by PBO (Process Before Output) block right before showing of the screen.

This is a generic event for the whole variety of events fired by PAI (Process After Input) block of the screen. They are fired by user actions on screen and its controls.

Here are examples of these events (” – is a symbol for single-line comments):

Collecting all the statements of SAP ABAP syntax we have learned in the previous sections let’s create a simple ABAP program and will analyze it into pieces.

The PARAMETERS statement is a special statement which defines implicit selection screen and we will discuss it in the future tutorials. Also in the INITIALIZATION block you can notice that the chain technique is utilized. A special * sign is used for marking blocks of comments in ABAP.