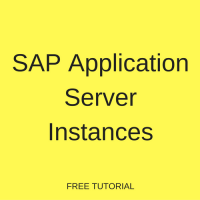 An SAP Application Server instance defines a group of resources such as:

An SAP Instance is uniquely identified with a SAP system ID, known as SID (System ID) and an instance number (2-digit number) from 00 to 99.

Each SAP instance can be distributed over multiple hardware units. These units can be a separate server or host, virtualize, logical or physical partitions within the same server or host. An instance is configured through an instance profile. An instance is also called application server in the software-oriented view of the client server model.

This main instance we called it Central Instance (CI) or Primary Application Server (PAS) instance which consists of 3 core services and other services process like ABAP dispatcher, gateway and ICM.

For distributed system, the 3 core services are separate in one instance and we called it ABAP System Central Instance (ASCS). The ASCS instance is used to manage locks, exchange any message and perform load balancing in the SAP system. There is no dialog process in ASCS instance.

Architecture of SAP NetWeaver Application Server for ABAP (SAP AS ABAP) is shown below:

The working process for SAP AS ABAP is as follows:

It handles communication between distributed dispatchers in SAP ABAP system. This process is configured only once for each SAP system. One of the vital services in SAP for SAP startup.

The lock table mechanism in the system manages by enqueue server components.

It enables communication between two SAP system or between SAP system and external systems. It exists once per application server and can also be installed as standalone gateway.

It allows communication with the SAP system using web protocols such as http, https or smtp. There is exactly one ICM process per SAP application server.

For Distributed System Setup, where Message Server and Enqueue process on separate instance which on (ASCS), Central Instance (CI) and Dialog Instance (DI), the different is only on SAP profiles while the process are the same.

Dialog Instance (DI) is an additional application instance on top Central Instance (CI). Normally we will be setting up DI on a different host.

But Dialog instance is only consisting of Gateway (GW), Internet Communication Manager (ICM) and Dispatcher Process (Disp) only. There is no Message Server and Enqueue Work Process.

DI instance will always start after CI instances start because it will depend on CI instance as the main instance where message server and enqueue server exist. Normally we setting up Dialog Instance for load balancing and to handle more workload rather than only have Central Instance.  The new name for DI is Additional Application Server (AAS).

Did you like this tutorial? Have any questions or comments? We would love to hear your feedback in the comments section below. It’d be a big help for us, and hopefully it’s something we can address for you in improvement of our free SAP BASIS tutorials.

Go to next lesson: SAP ABAP and JAVA Stacks

Go to previous lesson: What is SAP NetWeaver?

Go to overview of the course: Free SAP BASIS Training