Author Written by Lambertus Oosthuizen and last updated on Posted on March 13, 2017.
Advertisement 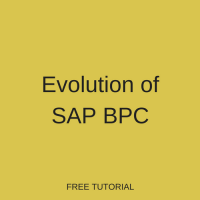 Welcome to the tutorial about evolution of SAP BPC where you will learn about the history of SAP BPC software application. This tutorial is part of our free SAP BPC training course.

The evolution of the product we know today as SAP BPC (Business Planning and Consolidation) is interesting and sometimes confusing. Up to 1998, SAP had no dedicated planning toolset available. If you ran SAP, planning had to be performed in the functional module, for example, CO-CCA (Cost Center Accounting).

The reality was that the functionality and usability of the transactions were poor and planning in 99% of instances were performed in MS Excel. With an additional step of uploading the spreadsheet to SAP using LSMW (Legacy System Migration Workbench) or a similar tool.

In 1998, SAP released SEM-BPS (Strategic Enterprise Management Business Planning and Simulation or BPS for short), its first dedicated planning tool. As far as planning functionality was concerned, it was a giant leap forward. BPS used BW (Business Warehouse) content, such as SAP Standard content InfoCubes and InfoObjects, which assisted in increasing the integrity of planning data. In addition, BPS used Excel within the SAP GUI, which pleased business users. However, BPS was complex and required consultants to do the configuration and setup of the planning applications. Another drawback was that BPS required users to use BEX tools, such as analyzer and the web application designer to perform any useful reporting which required additional training for the end-user.

In 2006, SAP released BI-IP (Business Intelligence Integrated Planning) as the next iteration in its planning toolset. While at first glance, BI-IP and BPS appeared to differ significantly, the overall approach to planning remained the same. The terminology of the various configuration steps differed, for example, a planning area in BPS was termed Aggregation level in BI-IP. BI-IP required the SAP portal to configure, which in my opinion was an unnecessary complication. The web front-end was ‘clunky’ at best and came with all the drawbacks of doing actual work in a web client. Accidently press refresh or back and your work was gone! It did however, offer an additional choice of planning front-ends, in that planning reports and input sheets could be presented to users in web templates, but user acceptance of the web client was mixed.

Just as BI-IP gained traction, SAP announced its acquisition of Outlooksoft in 2007. In purchasing Outlooksoft, SAP looked to address one of the major criticisms of its exiting planning toolset. Both BPS and BI-IP was considered too IT centric and involved too many consultants to maintain and configure. Outlooksoft was considered a ‘business-centric’ planning tool, which put the power back in the hands of business power-users. In addition, Outlooksoft also solved another of SEM and BI-IP’s problems, in that the legacy planning tools had no way of controlling the planning process, while Outlooksoft introduced Business Process Flows (BPFs). At the time of acquisition, Outlooksoft only ran on a Microsoft platform, meaning that it was a completely self-contained product, reducing complexity of maintenance and support.

After the acquisition of Outlooksoft (OS), SAP set out to integrate the new tool with Netweaver. The first release of OS for NW, version 7.0, ran on SAP BW, but was separate from the standard content in that it ran in its own namespace. Integration to the rest of BW was limited and required consultant involvement, especially in the area of data integration, negating some of the value proposition of implementing OS over BI-IP, for example. In the meantime, SAP also moved BI-IP back into the SAP GUI (transaction RSPLAN). The ‘metro map’ below gives a graphical view of the evolution on BPC

With the introduction of SAP HANA, there was a further divergence of product choices. Both BPC Classic and BI-IP moved to HANA. SAP basically rebranded BI-IP to BPC Embedded and made a half-hearted attempt to create the EPM-Addin (Enterprise Performance Management) for BPC Embedded. This was eventually (and inevitably) abandoned in favor of BoA (BusinessObjects Analysis for MS Office). Other features such as data-audit, BPFs and Work Status are fairly strong, but not up to the level offered by the NW Standard or MS versions.

BI-IP Embedded’s major advantage over the classic version running on HANA, is its very strong integration with HANA. FOX script runs native in HANA, while not all of Classic’s Script Logic has been optimized for HANA. As far as the future is concerned, BPC Embedded will also form the foundation of planning in Simple Finance. BoA will also be further developed to offer functionality, if not on par, very close to the EPM-Addin.

The roadmap for SAP BPC Embedded shows much tighter integration into SAP HANA and especially S4Finance. Features such as real-time integration of actuals and built-in predictive capabilities were features that customers have been asking for since the release of BPS. The embedded version will also get enhancements to features that are not on par with the classic version, such as Business Process Flows and Work Status. Real-time integration between planning applications will also remove ‘silo’ planning. It will be interesting to see how much additional consulting work will be required and how much will be ‘out-of-the-box’. Knowing SAP, consultants have a long and productive future in BPC.

For the MS version, an interesting line in the roadmap is the bi-directional integration with SAP Business objects cloud for planning. I have not discussed.

Did you like this tutorial? Have any questions or comments? We would love to hear your feedback in the comments section below. It’d be a big help for us, and hopefully it’s something we can address for you in improvement of our free SAP BPC tutorials.

Go to overview of the course: SAP BPC Training

2 thoughts on “The Evolution of SAP BPC”