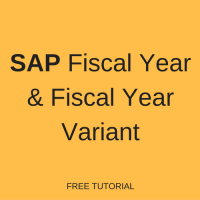 In the above screenshot, Month and Day indicates the period and days as per calendar. Period and Year shift are maintained in SAP as per the accounting year.

Note: In SAP, we can define periods up to 366. It is also possible that we can define 2 or more than 1 period for a month. SAP provided the fiscal year variant 24 as shown on the picture below.

In case of the calendar year, SAP system won’t allow to maintain periods because it is same as calendar. Period texts can be maintained.

Note: Year shift indicates if a fiscal year of the posting period is different to the calendar year.

Period texts are necessary to maintain texts against a period with a respective language.

Fiscal year variant periods are maintained for 2010 as shown below.

After periods are maintained, a fiscal year variant is to be assign to a company code so that the SAP system will allow postings for this company code.

+1 indicates that a fiscal year is later than the calendar year.

-1 indicates that a fiscal year is before the calendar year.

A fiscal year variant to be assign to controlling area in the transaction OKKP.

A shortened fiscal year is to be assigned to depreciation areas in the transaction OAYP.

Note: In asset accounting, the program ZRUMPF is to be executed to activate the shortened fiscal year as per the note 123026. (Table T093C-XRUMPF).

Did you like this tutorial? Have any questions or comments? We would love to hear your feedback in the comments section below. It’d be a big help for us, and hopefully it’s something we can address for you in improvement of our free SAP FI tutorials.

Go to next lesson: Currencies in SAP

Go to previous lesson: What is the Variant Principle in SAP FI?

Go to overview of the course: Free SAP FI Training