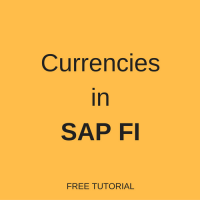 In this SAP FI tutorial, we will talk about currencies in SAP Financial Accounting. You will learn what is a currency in SAP FI and what are the configuration steps for defining a new currency in SAP system. We will mention the SAP transactions and tables that are relevant for this process.

What is a Currency in SAP

SAP released note 791997 with the setup of currency RON in SAP.

How to Setup a Currency in SAP

This step is necessary to create a new currency in SAP with text, ISO code and all other details.

2. Set Decimal places for The Currency

This step is necessary to set decimal places for a currency. Decimal places configuration cannot be changed after transaction posted because it will lead to data inconsistency. In our example, for currency RON decimal places should not be maintained (according to the recommendations specified in the note 791997).

A company code is in the currency INR whereas I have to book an invoice in USD. To allow this transaction first the currency translation ratios for INR/USD and USD/INR to be maintained. Next, the system will allow to maintain exchange rate and finally a user will be able to book the invoice in USD.

This step is necessary to maintain exchange rates for currencies against an exchange rate type. This activity needs to be performed at the client level on a daily basis.

In the above screenshot, the exchange rate is maintained between the currencies RON and BRL on a daily basis.

It is not mandatory to maintain the additional two local currencies in the new G/L. They can be maintained if there is a requirement. It is necessary to configure the same currencies in Asset accounting as well.

Types of Currencies in SAP

In SAP, we have 5 different kinds of currencies as explained below.

Group currency: The currency is assigned at the client level.

Hard currency: The currency which is assigned at the country level.

Index based currency: This currency is assigned to countries in case of high inflation in these countries.

Global company currency: The currency is assigned to a company or an internal trading partner.

The steps described above are the basic settings to define a new currency in SAP. In addition to the above, we also have other configuration settings available to define expiring currencies. For example, the currency ATS (Austrian Schilling) is expired due to the introduction of EUR currency.

Did you like this tutorial? Have any questions or comments? We would love to hear your feedback in the comments section below. It’d be a big help for us, and hopefully it’s something we can address for you in improvement of our free SAP FI tutorials.

Go to overview of the course: Free SAP FI Training

4 thoughts on “Currencies in SAP”