Author Written by Prasanthi A and last updated on Posted on December 14, 2017.
Advertisement 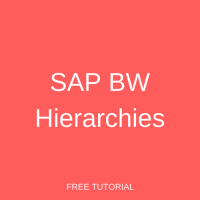 Welcome to the tutorial about SAP BW Hierarchy. This tutorial is part of SAP BW course. After completing this tutorial, you will learn basics of BW Hierarchies, how to use them in queries, and together with key figures.

For the sake of simplicity, this tutorial is divided into the following four sections:

SAP BW hierarchy specifies a parent-child relationship which contains numerous nodes and leaves. A node can be assigned as top-level node. There can be only one top level node, which is also called as root. A hierarchy level consists of all nodes at the same level. Hierarchies in SAP BW have the following properties:

You can structure your queries by adding hierarchies. You can attach a hierarchy to characteristics. As part of this tutorial, let’s take “ZSD_DEL_Q001”: Deliveries Overview Report (see the previous tutorial for more information about this report). Make sure that you open this query in Query Designer so that we can add hierarchies. The Query looks as follows:

In the Query Designer, let us add SAP BW hierarchy to the ‘Ship-To Party’ characteristic. To perform this action, just click on the characteristic and the system opens the ‘Properties’ pane for you. Screenshot is given below.

Now, go to ‘Hierarchy’ tab. This tab contains multiple options on selecting a hierarchy and expanding to a level, etc. The screenshot is given below.

The above screenshot shows that there are currently no active hierarchies. As our objective is to add a hierarchy to ‘Ship-To Party’ characteristic, let’s click on the button highlighted below to select the hierarchy.

The following dialog box will appear.

A hierarchy can be selected by clicking on the drop-down menu, which basically displays all active hierarchies that are available. Let us now choose the hierarchy name from the drop down, and click “OK” to proceed further.

The properties pane will now display that the Active Hierarchy Display checkbox gets checked.

You can also see that the characteristic icon gets changed. Screenshot is given below.

Now, click on “Save” button and the report gets saved.

The report output is given below.

The above output shows that the ‘Ship-To Party’ field is now structured around the ‘US Data Generation Customers’ hierarchy. You can further drill down by expanding the levels through the ‘Triangle’ icon highlighted in the below screen.

Now, select ‘Not Complete’ and it shows up the following sub-menu. Let’s select the lowest level to expand the hierarchy all the way down.

You can observe from the above screen that each level of the hierarchy displays a subtotal of lower levels.

End-users can turn off SAP BW hierarchy as per his/her need. For instance, as a designer of the query, you made the hierarchy active for ‘Ship-To Party’ characteristic.

Now, go to ‘Hierarchy’ tab and the following screen appears:

Now, deactivate the hierarchy by clicking on the checkbox highlighted in the above screen and click on “OK” to proceed further:

Below is shown the report output. You can see that there is no hierarchy on ‘Ship-To Party’ field.

It can be seen from the above screen that a hierarchy has been formed. Now, click on “Save” button and the report gets saved.

The report output is given below:

It can be seen from the above screen that ‘Volume delivered’ along with ‘Delivery net volume’ have been shown in the report output. This is very helpful, if you have multiple key figures which breakdown the main key figure further.

You can unlock information in SAP BW by using hierarchies. Hence, it is of utmost importance to become familiar with the purpose and functionalities of Hierarchies.