Author Written by Tania D'Souza and last updated on Posted on October 6, 2017.
Advertisement 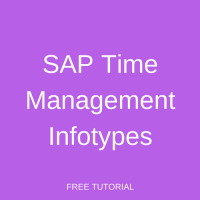 There are several standard SAP infotypes in which employees’ time data can be recorded. In this tutorial, we will take you through SAP Time Management infotypes which we consider most useful from a practical perspective.

Let’s start our overview of SAP Time Management infotypes with the Absences infotype. As the name suggests, this infotype is used to record periods during which an employee is absent, although scheduled to work. To put it simply, the leave availed by an employee is captured in this infotype. An organization may have various leave types, for example, Earned leave, Casual leave, sick leave. Each leave type is called an Absence type. Each absence type is treated as a subtype of the Absences infotype. You can create as many Absence types as required by the organization. We will explain the configuration of Absence types in a separate tutorial.

You can have a look at the layout of this infotype in Figure 1.

Let’s understand the main fields of this infotype:

Start date – This is the date effective which the employee is on leave.

End date – This is the date up to which the employee is on leave.

Absence type – This describes the type of leave availed during this period.

Time – The start time and end time must be filled if the absence duration is less than one day.

Absence hours – This indicates the duration of the absence in hours, and is automatically calculated by the system as the number of planned working hours during the absence period.

Absence days – This indicates the duration of the absence in days, and is automatically calculated by the system as the number of planned working days during the absence period. So, if an employee is absent from Monday to Friday of a given week, and Thursday is a day off as per the planned work schedule, the absence days will be 4.

Quota used – This field indicates the number of days which will be deducted from the corresponding absence quota. The calculation of this value depends on the organization’s policy. In the above example, some organizations may deduct all 5 calendar days from the quota, whereas others may deduct just the 4 absence days. These policies differ from organization to organization. Even within the same organization, there may be different policies depending on the type of leave availed. In SAP, counting rules must be configured in accordance with these policies to automatically calculate the number of days that must be deducted from the quota. We will explain the configuration of counting rules in a separate tutorial.

Please refer to the screenshot in Figure 2 to understand what this infotype looks like.

The Start date, End date, Attendance type, Time, Attendance hours, Attendance days and Calendar days fields are similar in principle to the corresponding fields of the Absences infotype. Of course, here they specify details about the Attendance rather than an absence.

Assume that, for example, the Planned working time infotype specifies that an employee should work in the Early shift on a given day. You can see the Daily Work Schedule FRK (which represents the Early shift) highlighted in Figure 3.

However, on a certain day, the employee is required to work in the Night shift instead. This deviation from the original planned working time must be stored in the Substitutions infotype. You can see this substitution highlighted in Figure 4. Here the Daily work schedule NAK represents the night shift.

Apart from substituting the Daily Work Schedule, the Substitutions infotype can also be used to specify a different working time, Work Schedule rule, Break schedule, position or work center. You can see each of these options in the above screenshot.

This infotype is used to store the number of hours worked over and above the employee’s planned working time for any day. You can see a screenshot of this infotype in Figure 5.

Did you like this tutorial? Have any questions or comments? We would love to hear your feedback in the comments section below. It’d be a big help for us, and hopefully it’s something we can address for you in improvement of our free SAP HR tutorials.

Go to overview of the course: SAP HR Training