Author Written by Velmurugan Saravanavelu and last updated on Posted on November 16, 2017.
Advertisement 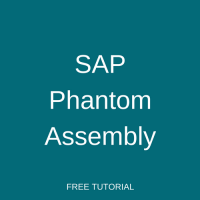 Welcome to the next tutorial of SAP PP training! Before reading this tutorial it is mandatory to learn about SAP bills of material because this tutorial will build upon this concept. SAP phantom assembly is a special non-stock material that has its own components (i.e., a product structure). SAP phantom assemblies are frequently used in automobile industry where several items (like nuts, bolts or accessories) are required at different levels of BOM. Instead of repeating these items again and again in BOM, they are attached to a phantom item and this phantom item will represent those items.

Here when truck production is planned for future, SAP system also plans for cabin, chassis and engine sub-assemblies. The requirement or demand for the chassis assembly will be passed to the wheel assembly which is a phantom assembly. During MRP (Material Requirement Planning) system will pass the chassis requirement directly to front wheels and rear wheels.

Let’s consider an example. A truck with 12 Ton capacity wheel assembly where it acts as phantom item (i.e., directly assembled into the truck). But for a truck with 20 Ton capacity, wheel assemblies are assembled separately and are attached to the truck due to some technical design aspect. In former case, the wheel assembly is defined as “Phantom Item” in material master by setting the special procurement key 50. On the other hand, in the BOM of 20 T truck, the phantom assembly off Indicator will be set. So that a separate planned order will be generated for 20 T truck requirements alone but not for 12 T truck.

In the material master of the wheel assembly, phantom assembly is set in the special procurement field. The wheel assembly is a material component in a higher-level BOM and has item number 0010. It also has a BOM of its own, containing components rear wheels and front wheels. In the standard system, dependent requirements are generated for components when the BOM is exploded in MRP.

Did you like this tutorial? Have any questions or comments? We would love to hear your feedback in the comments section below. It’d be a big help for us, and hopefully it’s something we can address for you in improvement of our free SAP PP tutorials.

Go to next lesson: SAP Co-Products and By-Products