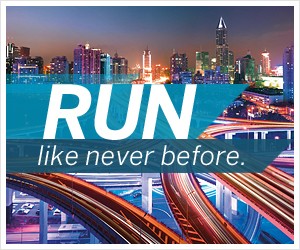 Ogilvy & Mather announced the launch of a new global advertising campaign for SAP AG, the world’s leading provider of business software. SAP’s “Run Like Never Before” campaign is an invitation to organizations around the world to unleash their imagination and harness new SAP innovations to realize their business vision.

The “Run Like Never Before” campaign coincides with SAP’s 40th anniversary. While SAP remains a leader in ERP and core business processes, the advertising campaign reflects the software company’s recent advancements in in-memory computing, cloud computing, mobile technology and analytics, and showcases how it is successfully bringing these innovations to its customers to help them run with greater agility, efficiency, and speed.

The new multichannel advertising campaign is aimed at further boosting awareness of SAP and highlighting its broad range of technology solutions that enable customers to take their business to the next level. The campaign also supports the company’s goal of reaching 1 billion people using SAP® software by 2015.

The new campaign was shot in China, Hong Kong, India, South Africa, and the United Kingdom, and will be seen in markets worldwide – reflecting SAP’s global strength and reach. Unlike traditional business-to-business advertising, the campaign connects on a human-level, and features high-energy music, engaging imagery and film techniques more commonly seen in consumer advertising.

“Companies of all sizes and in all parts of the world are looking at new business models and innovative practices that will allow them to grow in a rapidly changing world,” explained Jonathan Becher, chief marketing officer of SAP. “SAP provides its customers with the solutions and services to make their businesses run like never before.”

SAP will launch the “Run Like Never Before” campaign with television, print, digital and mobile ads on April 17, 2012 in the U.S., Brazil and Germany. Assets will be translated into 10 languages and shared with a global audience via the Web, social media channels and regional events. In alignment with the new campaign, audiences can learn more about innovation topics from both SAP and external thought leaders via the Business Innovation from SAP content hub.

“‘Run Like Never Before’ champions the promise of SAP technology to help companies both big and small to not only run better, but fundamentally transform how they do business,” said Chris Curry, creative director at Ogilvy & Mather. “With its new capability offerings and category-wide expertise, SAP is teaming with its customers to develop new ways of working and to do things they may have never thought possible.”

In tandem with the “Run Like Never Before” campaign, SAP and Ogilvy have developed a global recruitment marketing campaign intended to excite both current SAP employees and new recruits. Following the same creative approach, the marketing campaign invites recruits to imagine a career at SAP where they are empowered to take action and have the chance to make an impact. Campaign materials will be made available for all markets later this month. The campaign will roll out initially in China, followed by other high-growth markets.