Author Written by Prasanthi A and last updated on Posted on November 21, 2017.
Advertisement 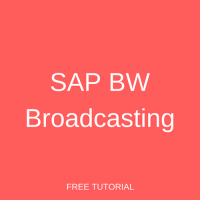 It is very common in all SAP BW real-time projects to use various BEx tools for creating multiple objects. In order to make these objects available to a broad audience (users), you need to use SAP BW Broadcasting functionality. You can also use SAP BW broadcasting for exception reporting and performance optimization. This tutorial is part of our free SAP BW training.

You can broadcast the following objects through an email or to SAP NetWeaver Portal:

For the ease of understanding, let us divide the tutorial into the following six sections:

SAP BEx Broadcaster can be called from the following BEx Tools:

From the context menu of the Web item, you can choose Distribute to access BEx Broadcaster from BEx Web Application.

From the context menu of the Web item, you can choose Distribute to access BEx Broadcaster from BEx Web Analyzer.

The following are the features of SAP BEx Broadcaster:

Precalculating and Distributing Workbooks: You can create the broadcast settings to precalculate and distribute workbooks.

There are some transaction codes that you need to know while working on SAP BW Broadcasting. Given below are some of those:

All logs for SAP BEx Broadcasting settings would be displayed using this transaction code. You can view logs only for scheduled settings, not for those that are directly executed. The screenshot is given below:

You can execute and debug any settings using this transaction code. The screenshot is given below:

There are also some programs that you can use to manage the BEx Broadcaster. Below given are some of those programs.

To delete the email logs that are created by BEx Broadcaster, you can use this program. The screenshot is given below:

You need to use S_RS_BCS authorization object to control the users who can register the settings for broadcasting execution.

If you need to run the broadcast settings of another user (if there are any user-specific precalculations), the other user needs to have S_BTCH_NAM authorization object to perform background scheduling.

You can schedule broadcasting when you see there is no need to run it immediately. The broadcast happens at the time defined by you.

You can configure to run broadcasts just once or periodically (every month / every week / every day / any specific timeslot). You can also run the broadcast only when an event occurs. You can include broadcasting as part of process chain. You can create a process chain and include RSRD_BROADCAST_BATCH (ABAP program) (the screenshot is given below) to schedule the broadcast automatically.

You have the following selection options to schedule a broadcast setting: