Author Written by Prasanthi A and last updated on Posted on November 29, 2017.
Advertisement 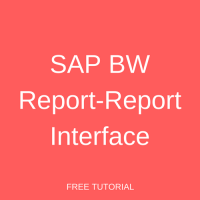 SAP BW Report-Report Interface (RRI) is widely used across many SAP BW installations because this feature offers multiple benefits to users. It helps in calling a jump target from a BW BEx query. In this context, the BW BEx query is known as the sender and the jump target is termed as the receiver. The jump targets can be called from the sender BEx query in BEx Web Applications and in BEx Analyzer. The jump targets can be Queries, Reports, Web addresses, and Transactions. This tutorial is part of our free SAP BW training.

To use SAP BW Report-Report Interface (RRI) in a BEx Query/ Web Application, you need to make sure that you have created the settings in Sender/Receiver assignment. To jump to an ABAP report or a transaction from a Sender query, Internet Transaction Server (ITS) needs to be installed for the target system. Even if you’re trying to jump to a target within BI server, ITS is needed. But, there is no need to install it separately, as it is automatically included in SAP BW system.

Let’s use a sample business case for discussion of SAP BW Report-Report Interface. There is a business requirement to jump to Deliveries Detail Report from the Deliveries Header Report. Both these reports are SAP BW BEx Queries created in Query Designer. The technical names of the reports are as follows:

The mockup of Deliveries Header Report is given below:

There are several steps involved in setting up SAP BW Report-Report Interface (RRI). Hence, the tutorial is divided into the following four sections:

To create a new sender/receiver assignment, you need to select the sender query (Deliveries Header Report) and click on

highlighted in the below screen:

You will then be prompted with the following screen:

As can be seen from the above screen, there are many report types to choose from. A brief overview of the different report types has been given below.

highlighted in the above screen to transfer the assignment. The following screen appears:

This finishes the process of selecting the sender and receiver queries. Now, we must assign the mappings between these two queries for SAP BW Report-Report Interface (RRI) to function correctly. In our case, the requirement is to link these two reports (Deliveries Header Report and Deliveries Detail Report) based on the Division InfoObject. To perform the same, click on

highlighted in the below screen:

Here, I will select the type as InfoObject and field name as 0DIVISION and selection type as single value. The screenshot is given below:

highlighted in the below screen to proceed further.

After closing the assignment details, you will see the following screen.

This finishes the process of configuring the Report-Report Interface (RRI) Setup. Let’s save the sender/receiver assignment by clicking on

highlighted in the above screen.

From the context menu of the Division “East” select Goto Deliveries Detail Report as shown below:

Calling the Receiver query from the Sender query

As can be seen from the above screen, you’ll get to see the granular data of the selected Division in the Deliveries Detail Report.

SAP BW Report-Report Interface (RRI) enhances the capabilities of SAP BW queries by allowing drill down functionality (to jump from one query to the other query). Business users need to get a solid understanding of the data, in other words, they need data granularity, for better decision making. SAP BW provides multiples features such as free characteristics and filters. However, they just do not serve this purpose completely. SAP BW Report-Report Interface (RRI) is a handy feature in such cases. It helps business users in jumping to the destination query from the source query for more deeper understanding of the data (to see line item level information). It is therefore utmost important to understand in and out of SAP BW Report-Report Interface (RRI) functionality for delivering greater business benefits.
—