Author Written by Sachith Wimalaratna and last updated on Posted on May 27, 2022.
Advertisement 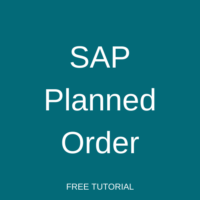 SAP Planned Order is an important component in the production and planning module in SAP. The planned order is considered as a procurement proposal in SAP. This means it is an intermediate state of a demand or procurement request.

Transaction code MD16 can be used to view planned orders created for a material.

Did you like this tutorial? Have any questions or comments? We would love to hear your feedback in the comments section below. It’d be a big help for us, and hopefully, it’s something we can address for you in the improvement of our free SAP PP tutorials.

Go to the next lesson: SAP Batch Determination