ERProof » SAP Full Form: What Does SAP Stand For?

Author Written by Cleo Isco and last updated on Posted on March 15, 2016. Posted in Categories All Things SAP.
Advertisement 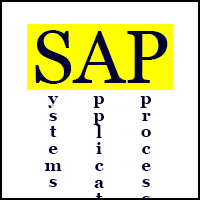 SAP is one of the leading Enterprise Resource Planning (ERP) systems currently available at the market. In this post, we are going to discuss what does SAP stand for or in other words what is SAP full form. If you actually would like to know what is SAP, we recommend you this short article: What Is SAP.

SAP is a software system that was originally developed in Germany, and therefore, there is no surprise that its name is an acronym of several German words. Interestingly, during its early time SAP once changed the name but the acronym remained the same. The original SAP full form was the following:

Later, SAP changed its name to the current form and now SAP stands for the following name (again in German 🙂 ):

Now that you know what is SAP full form, we can also tell you about other acronyms that are closely related to SAP. Until recent time, the full name of SAP’s ERP system was SAP R/3. Before R/3 they also had R/2 and R/1, so the last digit denotes version of the software system. The letter R means Real-time and the real-time capabilities of SAP system were the primary competitive advantage that it had over systems from IBM back in 1970-1980. SAP does not call its ERP system R/3 anymore. They first renamed it to SAP ERP and then to SAP ECC. The full form of ECC is ERP Central Component.

As you can see the people who founded SAP and then worked at management positions in this company really liked acronyms. Almost all of the names that their software system had were comprised of the first letters of other words. Nevertheless, this naming strategy turned our to be lucky for SAP. Currently, they are a multinational software corporation with a revenue of $16 billion and the largest market share in the market of enterprise software.

39 thoughts on “SAP Full Form: What Does SAP Stand For?”